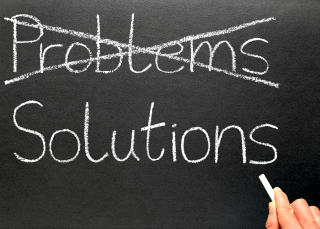 “‘Now get up! Go out and encourage your soldiers, for I swear by the Lord that if you don’t go out, not a man will remain with you tonight. This will be worse for you than all the trouble that has come to you from your youth until now!’ So the king got up and sat in the gate, and all the people were told: ‘Look, the king is sitting in the gate.’ Then they all came into the king’s presence” (2 Samuel 19:7-8, HCSB).

Sometimes we let our own personal problems and feelings overshadow what God is doing all around us. Such is the case with King David upon hearing of the death of his son and heir apparent, Absalom.

David’s army of Judah had just defeated an army of the other tribes of Israel in a civil war that Absalom led against David. David’s army prevailed and Absalom was killed in the fighting. When David heard the news of the victory and of Absalom’s death, he immediately went into mourning for his son: “So the victory that day was turned into mourning for all the people, for the people heard that day, ‘The king is grieving for his son.’” (vs. 2).

David let his own grief overcome not just his kingly responsibilities but even his gratitude to God for saving the nation.

END_OF_DOCUMENT_TOKEN_TO_BE_REPLACED

“If you have raced with men on foot, and they have wearied you, how will you compete with horses?” (Jeremiah 12:5, ESV).

When Jeremiah began to prophesy about the apostasy of Judah and its future captivity, he received death threats from the people in his hometown of Anathoth. Jeremiah complained to God about this persecution and this verse is the beginning of God’s response to Jeremiah.

END_OF_DOCUMENT_TOKEN_TO_BE_REPLACED

“And David was greatly distressed, for the people spoke of stoning him, because all the people were bitter in soul, each for his sons and daughters. But David strengthened himself in the Lord his God.” (I Samuel 30:6, ESV).

Do you ever feel like your problems are overtaking you? Why doesn’t God just work out all my problems when I’ve been so faithful to Him? And I’ve even prayed and asked God to solve my problems…

END_OF_DOCUMENT_TOKEN_TO_BE_REPLACED

“He said, ‘Your name shall no longer be Jacob, but Israel; for you have striven with God and with men and have prevailed.'” (Genesis 32:28, NASB).

After twenty years of separation, Jacob attempted to reconcile with his brother, Esau, whom Jacob had tricked into giving up his birth right.