At the beginning of 1 Samuel 14, Jonathan, King Saul’s son, and his attendant attacked a Philistine garrison. Meanwhile, Saul remained encamped on the other side of the pass with about 600 Israelite troops. In that assault Jonathan and his attendant killed about twenty Philistine soldiers.

Saul started to inquire of the Lord about what was happening in the Philistine camp by conferring with the priests who carried the ark of God. Deciding he might lose the opportunity to rout the Philistines, Saul gathered his troops and attacked and “struck down the Philistines that day from Michmash all the way to Aijalon” (vs. 31), a distance of about 15 miles.

Saul decided to renew the battle the next day and he again inquired of God whether he should go after the Philistines or not. “But God did not answer him that day” (vs 37). From Saul’s distorted theological perspective he was convinced that sin was present in the camp that was preventing the divine assistance.

It turns out the supposed sin was Jonathan’s disobedience to a direct order by King Saul that Jonathan had, in fact, not even heard Saul issue because he was single-handedly attacking the Philistine garrison.

Saul determined that Jonathan must be executed for disobeying his orders, but the Israelite troops interceded in Jonathan’s behalf and Saul relented from executing his son (vs. 44-45).

So why does God seem to favor Jonathan’s impulsive decision to attack the Philistines and not favor Saul’s contemplative actions when he stops to inquire of the Lord before attacking the Philistines?

END_OF_DOCUMENT_TOKEN_TO_BE_REPLACED

After their escape from Egyptian slavery, the Israelites constructed a transportable tabernacle to worship God during their Sinai wilderness wanderings. God demonstrated His presence among them by covering the tabernacle with a cloud by day and the appearance of fire by night.

The cloud and appearance of fire indicated the presence of God’s Spirit with His chosen people.

God leads His people by setting and revealing a path for each believer’s life. This verse  indicates that there are two important aspects to God’s guidance: stopping and going.  Stopping means remaining and waiting on God to lead and going means moving forward when He leads in a new direction.

END_OF_DOCUMENT_TOKEN_TO_BE_REPLACED

“So, brothers and sisters, because of God’s mercies, I encourage you to present your bodies as a living sacrifice that is holy and pleasing to God. This is your appropriate priestly service. Don’t be conformed to the patterns of this world, but be transformed by the renewing of your minds so that you can figure out what God’s will is—what is good and pleasing and mature.” (Romans 12:1-2, CEB).

This meditation is a hands-on lesson in how God works in our lives. Give it a try.

Here’s the point of this exercise:

We like to think of God’s will as something that is being revealed a little at a time. It’s like something we discover as if it is unfolding before us.

Actually, finding God’s will is more like folding than unfolding. It’s more like the displacement of our own will in favor of God’s will. It’s a place God leads us, not a place we discover.

END_OF_DOCUMENT_TOKEN_TO_BE_REPLACED

“Work out your salvation with fear and trembling; for it is God who is at work in you, both to will and to work for His good pleasure” (Philippians 2:12-13, NASB).

Recently I told a friend about an important life decision that I had made, yet I hadn’t received specific guidance from the Lord that this was what I should do. In my heart it just seemed to be the right decision and one that pointed in the same direction as God has been leading me.

My friend then quoted Psalm 37:23 (ESV): “The steps of a man are established by the Lord, when he delights in his way.”

At first I thought that doesn’t seem very spiritual. How can the everyday decisions I make be established by the Lord? After all, I make a lot of bad decisions, too!

END_OF_DOCUMENT_TOKEN_TO_BE_REPLACED 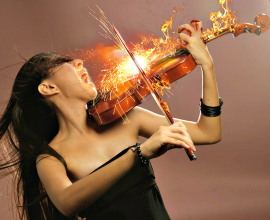 “Whatever your hand finds to do, do it with all your might…” (Ecclesiastes 9:10, NASB).

Whatever you do in life, do it with gusto, do it with enthusiasm, do it with passion! Do the best job you can do, no matter what you are doing! Abraham Lincoln said it like this: “Whatever you are, be a good one!”

When you become passionate for doing God’s will, for achieving success for God’s kingdom and God’s glory and not just your own, then what you do in life takes on eternal significance and it becomes your God-appointed assignment, God’s will for you. “For I have taken all this to my heart and explain it that righteous men, wise men, and their deeds are in the hand of God” (vs. 1).

END_OF_DOCUMENT_TOKEN_TO_BE_REPLACED

“See, I have placed the land before you, go in and possess the land which the Lord swore to give to your fathers, to Abraham, to Isaac, and to Jacob, to them and their descendants after them…See, the Lord your God has placed the land before you; go up, take possession, as the Lord, the God of your fathers, has spoken to you. Do not fear or be dismayed” (Deuteronomy 1:8,21, NASB).

Most of the book of Deuteronomy consists of speeches made by Moses to the Israelites during the final months of his life and just prior to entering the land of Canaan. This particular admonition to go and possess the promised land, contained notably in the first chapter of Deuteronomy, was repeated twice in the first twenty-one verses.

But, I think it’s also significant because it was not only God’s injunction to the Israelites, but He’s still directing His people in the same way and  with the same provocation today. God implores us to possess the promises He has made to us, to accomplish His plans and purposes for our lives, to achieve our destiny in Him.

END_OF_DOCUMENT_TOKEN_TO_BE_REPLACED

“So they camped or traveled at the Lord’s command, and they did whatever the Lord told them through Moses”  (Numbers 9:23, NLT).

When Israel was in the wilderness, God led the nation with a pillar of cloud or fire. The pillar regularly appeared as a cloud by day and a pillar of fire by night. When the pillar settled over the Tabernacle and the camp of Israel, it represented God’s presence and protection.

END_OF_DOCUMENT_TOKEN_TO_BE_REPLACED

“For how then can it be known that I have found favor in Your sight, I and Your people? Is it not by Your going with us, so that we, I and Your people, may be distinguished from all the other people who are upon the face of the earth?” (Exodus 33:16, NASB).

These are the words Moses spoke to God when he interceded for the Israelites after they had crafted a golden calf to worship while Moses was on Mt. Sinai for forty days receiving the Ten Commandments and other instructions from God. So, God threatened to send the Israelites into the promised land with only an angel to lead them and without His presence among them.

END_OF_DOCUMENT_TOKEN_TO_BE_REPLACED

“Early in the morning Jacob took the stone that was near his head and set it up as a marker. He poured oil on top of it and named the place Bethel…Then Jacob made a vow: ‘If God will be with me and watch over me on this journey, if He provides me with food to eat and clothing to wear, and if I return safely to my father’s house, then the Lord will be my God. This stone that I have set up as a marker will be God’s house, and I will give to You a tenth of all that You give me'” (Genesis 28:18-22, HCSB).

Jacob was on a journey to Haran and at the end of one of the days during his journey he stopped and camped outdoors.

That night God appeared to Jacob in a dream of a stairway that started from where he was and reached to heaven. Angels were ascending and descending the stairway. In the dream God transferred to Jacob all the essential elements of the covenant He had established with his grandfather and father, Abraham and Isaac.

END_OF_DOCUMENT_TOKEN_TO_BE_REPLACED

“But I will send you the Advocate—the Spirit of truth. He will come to you from the Father and will testify all about me” (John 15:26, NLT).

At the Last Supper Jesus explained to His disciples that He was going away–He was going to be arrested and executed–and so He would send the Holy Spirit, the Advocate, to be with His disciples.