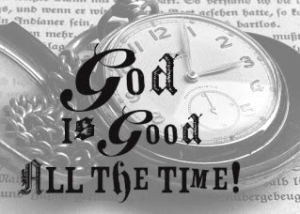 “The Lord is good, a haven in a day of distress. He acknowledges those who take refuge in him. With a rushing flood, he will utterly destroy her place and pursue his enemies into darkness” (Nahum 1:7-8, CEB).

Nahum prophesied during a time when Judah was attempting to gain independence from its Assyrian overlords. His prophecy foretold the destruction of the Assyrian capital of Nineveh.

Nahum begins his prophecy on the downfall of Assyria by laying a theological framework describing the character of God. In verse 1 Nahum says God is jealous and vengeful, full of wrath, and rages against His enemies. He says that although God is great in power, God is calculating  and severe when administering justice: “Who can stand before his indignation? Who can confront the heat of his fury?” (vs 6).

Then, in verses 7 and 8, Nahum seems to change course. He uses a contradictory set of adjectives to describe God. God is good, a refuge, a protector. It’s almost like God has a split personality, like God is good but maybe He’s not so good all the time!

I have two young children. Some days it seems like one minute I’m annoyed with them and punishing them for their bad behavior and the next minute I’m loving on them because they are so sweet. But, no matter how they behave, I love my children and I’m responsible for them. I want them to grow up to become good people.

God IS good. But God has a plan for this universe, this planet and the humanity that inhabits it. So, whatever opposes God’s good plans and purposes, His good will, is subject to His displeasure and punishment. But, He promises that He will be your refuge when you find refuge in Him. He will protect you when you depend on Him to do His will in your life!

There’s no split personality, there’s no inconsistency in God’s character or His behavior. God is love (1 John 4:8). He loves us and wants us to become Good like He Himself is!

Give thanks to the Lord because he is good. God’s faithful love lasts forever! (Psalm 136:1)