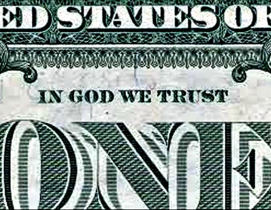 “And while being reviled, He did not revile in return; while suffering, He uttered no threats, but kept entrusting Himself to him who judges righteously” (1 Peter 2:23, NASB).

A law passed by Congress and approved by the President on July 30, 1956, declared “IN GOD WE TRUST” to be the national motto of the United States. This motto is engraved or printed on U.S. coins and currency.

So what’s so important about trust in God that we wanted it printed on our currency? It’s meant to show that the United States is a nation that trusts in God, a nation that recognizes God’s sovereignty over all nations on Earth.

“Trust” is a firm belief in the reliability, truth, ability, or strength of someone or something. Trust in God means recognizing or acknowledging that God is Sovereign and Mighty over His Creation.

But, in these verses the Apostle Peter tells us that when Jesus experienced suffering, He entrusted Himself to God.

So, “trust” is just the first step in establishing a trust-relationship with God. A young woman may love a young man, but she entrusts herself to his care and protection by marrying him. Trusting God must be followed up by entrusting ourselves to God.

Entrusting yourself to God means you make yourself available to God to work His will through you. That’s what Jesus did.

Trust in the Lord with all your heart and do not lean on your own understanding. (Proverbs 3:5, NASB)