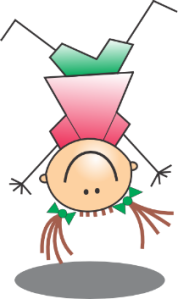 In Luke 17 Jesus told His disciples about His second coming to earth and how those that try to hold on to their life in this world will lose it in the end.

In Luke 18 Jesus told the story of a Pharisee who prayed he was thankful he was not sinful like other men, while a certain tax collector prayed and called on God to have mercy on him as a sinner. Jesus exposes the prayer of the Pharisee as self-exalting.

Both of these stories conclude with a fundamental principle of the gospel that Dallas Willard in his book, The Divine Conspiracy, called The Great Inversion. The behavior Jesus taught always seemed to be the inverse of what was normal or typical in this world, like jumping upside down!

It was behavior that was future-oriented!

Those who are always last in this life will have the honor of being first in the age to come!

And, leaders should also be servants.

Jesus always related to people in terms of what they could become in God’s Kingdom, not what they had been in their past or present life. So, God is not only concerned about our personal relationship with Him, but also about the expression of this relationship in action and behavior that will ultimately manifest itself in our eternal life.

God wants to prepare you for your real life, your eternal life. He wants you to begin to act and behave now the way you will be in eternal life.

“They did not receive what was promised, but they saw it all from a distance and welcomed it. They agreed that they were foreigners and nomads.”  (Hebrews 11:13, NLT)