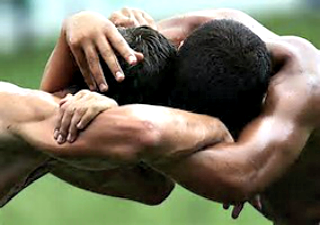 “He said to Jacob, ‘What’s your name?’ and he said, ‘Jacob.’ Then he said, ‘Your name won’t be Jacob any longer, but Israel, because you struggled with God and with men and won.’ Jacob also asked and said, ‘Tell me your name.’ But he said, ‘Why do you ask for my name?’ and he blessed Jacob there. Jacob named the place Peniel, ‘because I’ve seen God face-to-face, and my life has been saved.’ The sun rose as Jacob passed Penuel, limping because of his thigh” (Genesis 32:27-31,CEB).

I once heard it preached that choosing to believe Jesus was the Son of God and died for our sins so we could have eternal life was more plausible than choosing not to believe.  Because, if you believed and got to the end of your life and it wasn’t true, you still lived a good life with no regrets. But, if you didn’t believe and it was true then you risked a dreadful eternity.

In other words, it is more logical (and eternally safe) to believe in God than not to believe. And, we get to choose…

While our modern minds try to analyze everything, even faith in God, and make it logical and rational and human-centric, the biblical pattern is actually something quite different: God chooses us and we choose whether to accept His challenge or not.

In fact, struggling with God is the normal Christian life.

These verses from Genesis 32 describe the outcome of a wrestling match between Jacob and God. Jacob was at a crossroads in his life. He had deceived his brother, Esau, and his father, Isaac, to obtain Esau’s birthright and inheritance, then fled from his brother and his homeland. Jacob also deceived his father-in-law, Laban, and absconded with the best of his flocks.

Now, Jacob was returning home and he would have to confront his estranged and embittered brother. As Esau and his army of four hundred men approached, Jacob threw himself on the mercy of God to protect him and his family from the anticipated wrath of Esau. In so doing, Jacob encountered God–identified in these verses as a man (a manifestation of God as a person, either an angel or a theophany).

Jacob’s encounter with God was in the form of a wrestling match. Jacob wrestled with a “man” all night long. During the match the man tore a muscle in Jacob’s thigh.

As dawn was breaking the man demanded that Jacob let go of him. Jacob refused to let go until the man blessed him.

The man blessed Jacob by renaming him from Jacob the deceiver to Israel, the one who struggles with God. Then Jacob named the place where he had this wrestling match with God Peniel, which means face of God.

In other words, Jacob had a personal encounter with God that resulted in a transformative experience. He came face to face with God and his life was changed forever. Jacob returned to the promised land and settled his family there and they became a nation of God’s chosen people. And, his confrontation with Esau ended up being a family reunion.

Believing that God has saved us isn’t a matter of logic; it’s a matter of faith. It’s not something we analyze; it’s based on a relationship.

God calls us to be His children us and we reciprocate (or not) by trusting Him and His protection over our life in the present and for all eternity.

As we go through life, we contend with God. Just as Jacob of old, we hold on to Him; we plead for His protection; we  personally experience His salvation.

And, we know we are His chosen ones because He has left his mark on us. He wounds us with His love and grace.

The Christian life is like a wrestling match with God. You struggle with Him and He with you until you surrender to Him. Then He transforms you into a new person.

So remember that once you were Gentiles by physical descent, who were called “uncircumcised” by Jews who are physically circumcised. At that time you were without Christ. You were aliens rather than citizens of Israel, and strangers to the covenants of God’s promise. In this world you had no hope and no God. But now, thanks to Christ Jesus, you who once were so far away have been brought near by the blood of Christ. (Ephesians 2:11-13, CEB)