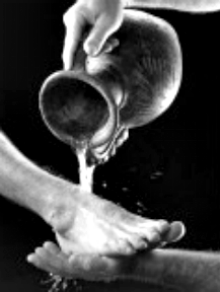 “Jesus knew that the Father had given him authority over everything and that he had come from God and would return to God. So he got up from the table, took off his robe, wrapped a towel around his waist,and poured water into a basin. Then he began to wash the disciples’ feet, drying them with the towel he had around him.”  (John 13:3-4, NLT).

John says that Jesus came from God and had all authority over everything and then He washed His disciples’ feet!

The God of the universe became a human being and then washed the feet of the human beings He created?

Surely, John’s juxtaposing a declaration of Jesus’ divine nature and glory with a declaration of His humility is both intentional and inspired. But wouldn’t it seem more probable that Jesus came from God and had authority over everything and then commanded His disciples to fall down at His feet and worship Him?

Really, how much can God possibly love people?

And if that’s not enough, then Jesus explained that He was doing this to set an example for us to follow: “And since I, your Lord and Teacher, have washed your feet, you ought to wash each others feet. I have given you an example to follow. Do as I have done to you” (vs. 14-15).

Jesus didn’t command us to fall down at His feet and worship Him, which would certainly be easier than what He actually commanded us to do. He commanded us to show the humility and regard we should have for Him to one another!

Really, how much can we possibly love people?

“So now I am giving you a new commandment: Love each other. Just as I have loved you, you should love each other. Your love for one another will prove to the world that you are my disciples.” (John 13:34-35, NLT)