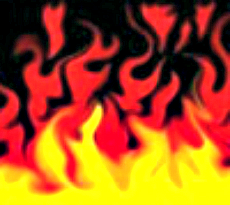 “They know God’s justice requires that those who do these things deserve to die, yet they do them anyway. Worse yet, they encourage others to do them, too” (Romans 1:32, NLT).

There’s been a lot of controversy lately among Christians on theological questions about universal salvation, hell, and who occupies it (or not). While an exhaustive discussion of these theological issues is beyond the scope of this blog (and beyond the capability of this amateur theologian), I would, however, like to submit a short defense of hell.

In this verse the Apostle Paul states a fundamental proposition that is prerequisite to any theological discussion of universal salvation and hell. That question is: How could a good God could sentence anyone to eternal punishment in hell, to eternal separation from Him?

In this world, people who refuse to acknowledge the truth and reality of God as revealed in Christ are actually joining in a cosmic rebellion of Satan and his cohorts against God and humanity (Revelation 20:10, 15). Under any fair system of justice, conspirators receive the same judgment and sentence as perpetrators of a crime because they share the same nefarious intent.

If people refuse to love God’s truth in this world, why would they be any different in eternity?

Jesus illustrates this point in the well-known parable of the final judgment (the sheep and the goats) in Matthew 25:31-46. The parable distinguishes between people who want to please God and those who want to live for their own satisfaction. It establishes that those who live their lives with an attentiveness toward eternity also begin to live out their eternal life in their present life. And it urges us to demonstrate in our present lives what we are becoming and will be in God’s eternal kingdom.

The parable also specifies that hell is a place prepared for the devil and his demons and twice indicates that those who don’t serve God in this world receive the same judgment as Satan (and not in allegorical terms). In other words, if Satan has chosen to rebel against God, how could he spend eternity with God and in His presence?

It doesn’t even make sense and hell makes complete sense–God’s justice requires it!

“There is no judgment against anyone who believes in him. But anyone who does not believe in him has already been judged for not believing in God’s one and only Son. And the judgment is based on this fact: God’s light came into the world, but people loved the darkness more than the light” (John 3:18-19, NLT).