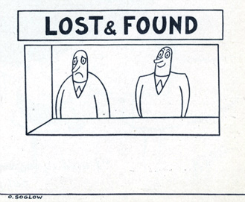 In Luke 15 Jesus told three lost-and-found parables in response to complaints from the Pharisees and scribes that He consorts with sinners even to the extent of eating with them. To the Jews tax collectors were turncoats and, consequently, the worst kind of sinners because they worked for the Roman government to extract taxes from their Jewish brothers.

In the parable of the lost sheep the owner leaves the flock behind to search for one sheep that has become separated from the flock. In the parable of the lost coin a woman loses one of her ten silver coins and searches her house until she finds it. Both the sheep owner and the woman report the good news to friends and neighbors so they can share in the joy of their search and recovery efforts!

And, both parables demonstrate God’s attitude toward the wayward and disobedient and seem to contrast God’s joy at the admission of sinners into heaven against the self-righteousness of the Pharisees.

The third parable is the  familiar story of the lost or prodigal son. A son claims his inheritance from his father and squanders it so that he is left homeless and broke. His need becomes so great that he has to accept what is an ultimate indignity for a Hebrew by hiring out as one whose job is to feed the pigs. Not only is the work distasteful, but the pigs are eating better than he is! At this lowest point of his indignity, the son realizes that his father’s servants eat more regularly than he does, and so the prodigal son decides to return to his father to become one of his servants.

The father was apparently watching and waiting for his son because from a distance the father could see his son returning home. The father welcomed the son back as a son, not as a servant, and called for a celebration at his return.

Like the prodigal son, you may have come to that place in your life where you find yourself seemingly unworthy to be called a son or daughter of God. Maybe you have even lost any trace of self-respect and developed a sense of complete worthlessness.

This parable declares that you can take comfort in the fact that when you are at the place where you seem far removed from God, then you are precisely at the place where God is nearest! For that is when your Heavenly Father sees you, and filled with compassion, He runs to you, throws His arms around you and welcomes you back to Him!

God’s lost and found department keeps track of the lost souls of men and women. The sign on the window says open and He is waiting at the counter for you to come and claim the destiny that you have with Him!