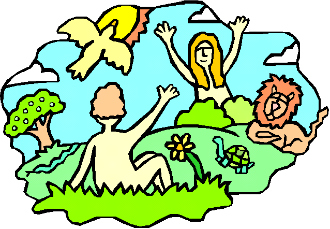 In the Creation Story in Genesis 1 God created man and woman at the same time (Genesis 1:27). Genesis 2 seems to describe a second creation story providing details about human origins. In fact, most of us consider Genesis 2 an elaboration or embellishment of the first creation story, believing it to amplify the description of the sixth day of creation in Genesis 1.

Instead of a replay of the Creation Story described in Genesis 1, perhaps Genesis 2 is a continuation of the Creation Story, possibly the next chapter, in God’s already created order describing the first people God chose to work His redemptive plans and purposes for all of humanity.

Nevertheless, we must not interpret the Creation Story as a scientific explanation of the origin of human beings. We should receive the story for the redemptive message it delivers regardless of how allegorically or literally we believe the message is expressed.

To find a suitable helper for Adam, God had Adam search through all the animals and none were equal to him to become a “suitable helper.”

Two Hebrew words, ezer kenegdo, are used to express the concept of a “suitable helper.”  The word translated “helper” is the Hebrew term ‘ezer.’  This word is usually used in the Old Testament in referring to God as being a divine helper or strengthener. Certainly, God, as a Helper, is not subservient to humans, so the role of “helper” in Genesis 2:18 does not depict a subordinate helper.

The Hebrew word translated for “suitable” is kenegdo. It carries the meaning of “opposite.” A suitable helper would be an appropriate match for Adam, not someone for Adam to rule over like the animals (see Genesis 1:26). A suitable helper was opposite in gender, but made to be everything Adam was not–his complement.

By searching throughout the animal kingdom, Adam may have needed to come to an understanding of the distinction between the human species, which was created in the image of God, and animals in order to distinguish a suitable helper. In other words, God didn’t need to know what was a suitable helper for Adam, Adam needed to learn what comprised a suitable helper.

When no suitable helper was found among the animals, God took one of the man’s ribs and formed a woman (Genesis 2:20-21).  The Hebrew word tsela that is interpreted as “rib” in most Bible versions is never used as an anatomical term in any other passage in the Old Testament. A more fitting expression might be “from the side.” God took one of Adam’s sides or one side of Adam to form the woman.

The powerful imagery being expressed is as if God was literally cutting Adam in half and from one side forming the woman. God made a person for the man who was fully his equal and fully his match.  Only in this way could the man’s loneliness be alleviated.

The woman being fashioned from the side of the man as his suitable helper should be understood as a powerful and meaningful expression for the most profound relationship in human existence in which there is complementary yet absolutely equal status between the genders. The two genders were made to work and fit together.

The crux of Genesis 2 is that the marriage relationship is not merely a biological connection between the male and female of the human species, it is a sacred, spiritual bond that at some level recovers or restores humanity’s original state: “That is why a man leaves his father and mother and is united to his wife, and they become one flesh” (Genesis 2:24, NIV).

The main take away from the second Creation Story is its depiction of women. The female is more than the reproductive part of the human species as in the animals. The female has a valued status as an equal and complementary companion to the male.

Both genders were made in God’s image: “So God created man in his own image, in the image of God he created him; male and female he created them” (Genesis 1:27, NIV).

Nevertheless, in the Lord woman is not independent of man, nor is man independent of woman. For as woman came from man, so also man is born of woman. but everything comes from God. (1 Corinthians 11:11-12, NIV)