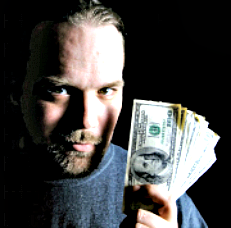 “Now who will volunteer to consecrate himself to the Lord today? Then the leaders of the households, the leaders of the tribes of Israel, the commanders of thousands and of hundreds, and the officials in charge of the king’s work gave willingly…Then the people rejoiced because of their leaders’ willingness to give, for they had given to the Lord with a whole heart. King David also rejoiced greatly” (1 Chronicles 29:5-6,9, HCSB).

In preparation for building the temple, King David accumulated precious metals and stones and wood for its construction. In addition to all the materials he accumulated as King, he gave a substantial amount of gold and silver from his personal wealth.

Then he asked the leaders of Israel what they would give! And what’s interesting is the way King David asked them to give.

He didn’t just ask them to give money to help build the temple. He didn’t promise them that God would bless them if they gave. He didn’t even say they would start construction as soon as they collected enough money.

He asked them who would voluntarily consecrate themselves to the Lord!

So David equated making an offering with consecrating oneself to the Lord.

Consecrate means to make or declare sacred or holy or to dedicate to a specific purpose. David asked the Israelites to make themselves holy, to dedicate themselves to God’s plans and purposes. And in so doing, they would give of their wealth and substance to support the construction of God’s temple in Jerusalem.

David recognized that God wasn’t as interested in what or how much they contributed as He was in their devotion to Him. Their offerings were merely an expression of their personal devotion, of their dedication to God’s plans and purposes.

God doesn’t need our money; He wants our hearts!

And giving to God is certainly an expression of what’s in our hearts (or not in our hearts). If you want to live your life dedicated to doing God’s will, then you will want to give your money and your time to advancing God’s Kingdom.

And there’s definitely an upside to giving.

The Israelite leaders responded positively to David’s challenge–they “gave willingly.” In addition to the substantial amount of his personal wealth that David dedicated to the construction of the temple, the Israelite leaders also gave a substantial amount of precious metal and stones from their personal wealth to help pay the costs of the temple construction.

And after these gifts were given, the Israelites were joyful because their leaders had willingly given without being commanded. They gave freely to the Lord and the result was that it made them happy!

David acknowledged that what they gave was only what God had given them in the first place: “For everything comes from You, and we have given You only what comes from your own hand” (vs. 14).

When done willingly and freely with a whole heart, giving makes you happy! And when you give to God you are really just giving back to God some of what He has blessed you with in the first place.

So, giving to God is not an imposition but a joyful expression of our worship of Him. That’s why God loves a cheerful giver!

“Each person should do as he has decided in his heart—not reluctantly or out of necessity, for God loves a cheerful giver. And God is able to make every grace overflow to you, so that in every way, always having everything you need, you may excel in every good work.” (2 Corinthians 9:7-8, HCSB)