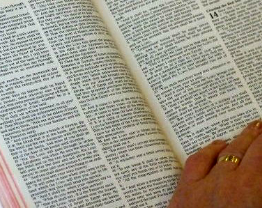 “And word from the Lord was rare in those days, visions were infrequent…Samuel did not yet know the Lord, nor had the word of the Lord yet been revealed to him…Behold, I am about to do a thing in Israel at which both ears of everyone who hears it will tingle…What is the word that He spoke to you, Please do not hide it from me…And the Lord appeared again at Shiloh, because the Lord revealed Himself to Samuel at Shiloh by the word of the Lord” (1 Samuel 3:1,7,11,17,21, NASB).

At the time in Israel’s history when it was still a confederation of tribal groups, God spoke to Israel through priests and prophets. These religious leaders were also the political leaders of Israel.

In the time of Samuel, there had been diminution of God’s voice being heard among the religious leaders of Israel. So much so that it seemed that Israel was no longer favored by God.

God speaks to us personally through His Word, the Bible, but He speaks to us within the context of His word. So, we should apply this same pattern for hearing God’s voice when we read the Bible as God explained to young Samuel .

In Matthew 7 and Luke 11, when Jesus taught the disciples how to pray, He also emphasized that they should pray diligently, persistently, relentlessly. In both texts Jesus remarked that when you pray in this way, God will answer, God will speak!

So, when God’s not speaking, then you’re not seeking!