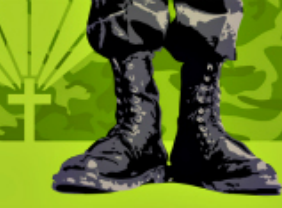 1 Chronicles 12 records the assembling of David’s army during the years that David was in hiding from King Saul.

What’s interesting about these warriors that joined up with David was that they were defectors! They changed loyalties! They transferred their allegiance!

Most or all of them were formerly followers of King Saul, even Saul’s relatives. There were ambidextrous archers from the tribe of Benjamin (vs. 2-7) and desert warriors from the tribe of Gad that crossed the Jordan River to join David (vs. 8-15). And when even more Benjamites defected, David was reluctant to trust them until they swore allegiance to him under the inspiration of the Spirit of God (vs. 16-18). Men as far away as Manasseh defected and joined David’s army  (vs. 19-21).

All these defectors were skilled and brave warriors. They defected to David because they believed David was God’s chosen king and they wanted to join him in his cause. And, the number of defectors grew until they became a great army. This army of defectors became the army of God!

There is an evil power in the universe, the devil or Satan, who has set himself against God. Since this dark power, the devil, was originally created by God for good, his insurrection does not constitute a war between equal or independent powers.

It is more like a civil war—a rebellion or uprising of a subversive political faction trying to overthrow a legitimate government.

But Satan drew humanity into the conflict, brought evil into the created order, and alienated humanity from God. And now, the main issue in this conflict is not an individual’s personal sins, though one’s sins may be many or few.

The real issue is whose side you are on!

While this conflict is of cosmic proportions, its legal resolution is individually transacted when a person defects and transfers allegiance from the evil kingdom to God’s Kingdom.

If you are a follower of Jesus, you are already defector. You are like those who defected from Saul to join David to become the army of God!

For those still participating in the rebellion, God wants them to defect to His side.

And our duty as soldiers and warriors in God’s army is to try to persuade them to come over to our side–to God’s side!

Be a defector! Defect from sin and unite with God’s army–God’s army of defectors!

“For when you were slaves of sin, you were free from allegiance to righteousness… But now, since you have been liberated from sin and have become enslaved to God…the end is eternal life! For the wages of sin is death, but the gift of God is eternal life in Christ Jesus our Lord” (Romans 6:21-23, HCSB)